The Training of Socket Greeny by Tony Bertauski 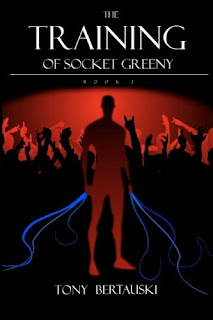 Title: The Training of Socket Greeny
Author: Tony Bertauski
Series: The Socket Series #2
Publisher: Bertauski
Release date: Sept. 17, 2010
Pages: 264 (paperback)
Obtained from: Author
Socket Greeny is trying to live two lives: one as an evolved human while hanging onto his normal life. While fearlessly dealing with his masochistic trainer, he's trying to salvage his deteriorating releationship with his girlfriend back home. But Socket's greatest challenge is to find his true enemy. He discovers that fear has many faces, some that he's more familiar with than he would care to admit. -Goodreads

After finishing the first book in the series, there was just no way that I could forget about Socket and his friends--especially since the sequel promised to be just as exciting (if not moreso) than the first. And it was!

The Training of Socket Greeny is the second book in the Socket Series, and like the first book, wastes no time getting into the action. A year has passed since Socket first saved the world, and since then he's been extensively training so he can be admitted as an official Paladin soldier. Even though we don't get dragged through every single training exercise, we see enough to realize how much Socket's powers have grown--and boy, have they grown. As if time stopping and mind reading wasn’t enough, Socket discovers that he has an even stronger power, one that is revered throughout the Paladin Agency. It was fun to see him try and figure out how to use it, let alone figure out what it was in the first place.

However, even though Socket has made himself a respectable candidate, he’s still the same guy with the teenage-chip-on-my-shoulder spunk that I adored from the first book. I like to see characters that grow but still remain true to who they really are. Torn between maintaining his relationship with his two best friends and becoming the savior of the world, he handles the drama like any normal teenager would—with frustration, hope, and a bit of sadness when he realizes that maybe he can’t be two people at once (which was a very sad scene, by the way). I liked seeing more of his friends, even if their get togethers were strained from the pressures of life. In addition, we learn more about Streeter and Chute and they grow just as much as Socket does by the end of the book, especially after Socket demonstrates to what length he’s willing to go in order to save them (even if it’s from themselves).

However, even though I enjoyed the fast pacing of some of the scenes in this book, sometimes things were happening so fast and things were so abstract that I wasn’t able to follow what was going on. This wasn’t a huge issue because immediately after these scenes happened (and I mean, immediately), they were explained, but still, I had to go back and reread what had happened to understand who was being attacked, who had died, what sort of information was being revealed to Socket, ect. This was an especially issue towards the end when mass pandemonium erupts. Even though that scene was just made of pure unfiltered awesome, it took a little time and thought to put together what was going on.

Overall, I enjoyed The Training of Socket Greeny even more than the first book, and eagerly await the conclusion of this series in book three, The Legend of Socket Greeny. I recommend this series to anyone looking for a modern(ish) and intense sci-fi read! 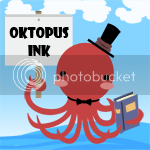 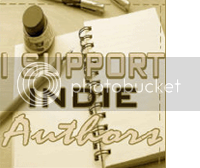